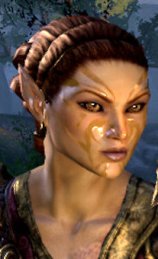 *Zells note: Most of the entries I do for the characters function at least partly as role-play explanations of things that happen in the game, but that’s especially true of this post, which is my version of how my characters got access to the Dro-m’Atha Senche limited edition mount.  (Besides “it was in the Crown Store” and “I’m a sucker”, I mean.)  There’s a little bit of in-game explanation, in that the people-shaped Dro-m’Athra are corrupted Khajiit, probably Namira’s doing originally, but the information’s a bit sketchy.  I took some liberties, and loosely tied the Dro-m’Atha Senche to Azura, given that she is also worshipped by the Khajiit (as Azurah), and the Dro-m’Atha Senche has twilight associations.  YMMV, as they say, but I’m not claiming this is canon, just my fan-wank.

Overheard this afternoon a pair of Bosmer and Khajiit mages discussing an unusual astrological conflux .  Apparently for a span of about 5 days, it will be possible to summon and form a bond with a senche mount made of twilight, using an adapted form of the ritual used to summon Azura’s winged twilight servants.  Must investigate.

rest of page filled with astrological glyphs and alignment configurations

Pro’lly will never summon the WT; ‘Fire doesn’t use pets.  But I spent the skill point for RP effect, since it’s the basis of her ritual.

All the material I can find is from Khajiit mages — most of it is incomprehensible (by Jode, their training methods are unfathomable) and much of it is in Ta’agra.  The Bosmer mages are helping me translate; one of them speaks and writes Ta’agra.

I’m asking Bosmer mages for assistance with research on Khajiit magic.
May Julianos protect me.

Note ⇒ the Dro-m’Atha Senche is not a servant of Azura’s, as I originally assumed, merely from an adjacent plane accessible through her Twilight Realm in Oblivion.

Much adaptation required; this ritual was created by people with tails and incomprehensible syntax in their magical formulae.  The details of the moons’ cycles… I had no idea the Khajiit had so many different names for the phases of the moons.  I was content with merely the usual two dozen used by mer mages.

Ritual is very exacting and simultaneously vague, do not have most of the elements.
Will make do.

Will need to return to the ritual space used by the Brackenleaf to summon my senche spirit guide; I have a magical association with the space already, and the spiritual correspondences built into the site’s construction will help the twilight beast form into the correct shape and gets me past many of the complications I’d face otherwise.  I’ve sent a message and they are reasonably amenable.  For an insult-laden, Bosmer-specific value of “reasonable”, I might amend.

Zellfire at the ritual circle by the sacred senche skull and spirit power stone.

rest of page is filled with doodles of Azura, senche, and unflattering sketches of Bosmer

The preparatory work for learning the summoning is now done.  Once at the Brackenleaf ritual circle, during twilight, I will complete the final step and master the usual ritual to summon a Winged Twilight from Azura.

I also “burned” 3 TLS in the ritual brazier for RP effect.

The Dro-m’Atha spirit will need a body to inhabit.  I will bring good, strong leather to the site – I have some from a senche I’ve killed previously, which should work, but only with fresh blood on it — I’ll have to hunt a senche in the twilight and soak its blood into the leather immediately prior to the summoning.

Twilight is usually a brief, transient time, and I was worried I wouldn’t be able to finish all necessary preparations, but somehow it seemed to last forever and I got it all done.  Perhaps it was the forest canopy; perhaps it was Azura’s favor.

I had thought to kill a senche for the blood, but the forest did me one better – while hunting for a senche, I found instead a feral spriggan, who attacked without provocation.  I was annoyed at the waste of my precious twilight time, until she summoned a forest spirit to defend her, and the spirit took the form of a senche.  Perfect!  I killed them both and soaked the leather in the blood of the spirit senche before its corporeal form faded from existence.  The blood stayed on the leather for some time after the body disappeared, then it finally faded out as well, but I could tell the leather had been properly charged and knew the shape it was meant to take.

The Brackenleaf spirit-summoning circles are really quite well constructed and maintained.  I was surprised by their power previously, but assumed that was part of the effects of the spirit guide ritual – sometimes after a good ritual, the whole world seems to glow.  But no, it really is an amazing space, and they are quite right to protect it as vigilantly as they do.  I must admit to a growing respect for Bosmer magic.

I had also thought that I would do the summoning within the Brackenleaf’s Senche circle, but when the final moment came, I knew instinctually it was not the right place.  With the ritual nearly complete, I held it together with will and walked down to the edge of a body of water near the Brackenleaf’s settlement.  I couldn’t see the horizon behind the trees, but one instant there were no stars, and then Azura’s first sparkled in the sky and I let the ritual complete itself, precisely at first-star, standing on the threshold between land and water.

She’s beautiful, my senche darling of light and darkness.  The ritual worked better than I’d hoped.  My only annoyance is that I will have to share her with the other members of my consortium who use the same stable.  No matter; she knows who brought her to Mundus.