Archive for the tag “Dunmer”

If you got to this blog post from a “Skooma Bubbler” search, you’re probably looking for this information: the Bubblers and the pattern can still be gotten in-game, but only by pickpocketing npcs with the “Drunkard” designation. The Bubbler itself is a rare drop; the pattern is a very rare drop, but it’s possible. The best places to try are Inns, or towns with celebrations going on, like Skywatch or Windhelm. Good luck!

It’s the little things that keep me up at night, like the fact that we harvest honeycomb from wasps during the New Life Festival. What’s up with that ZOS? And this has bugged me from the first time I saw it. The picture on the left is a “Khajiit Skooma Bubbler”.

Look at the color of the glass and the curved shape of those weird pointy bits. I don’t know how much time you’ve spent looking at furnishing items, but I have an hour or two invested, and I call shenanigans.

Let’s take a look at some Dunmer furnishings: 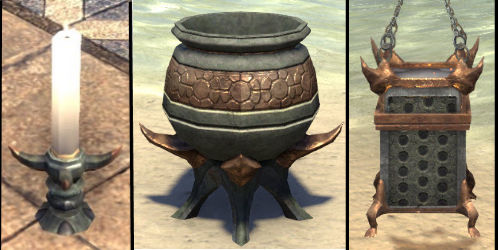 And for comparison, here’s a few actually-Khajiit items:

The shape of the pointy bits is different, the color of the gold metal is different, and no other Khajiit item is that green color.

I’m imagining the dude who invented it was in the process of manufacturing and shipping out a few hundred of them when he got busted by Ordinators. He immediately pointed at his Khajiit slaves, shouted “All theirs!”, pocketed the gold in the confusion, and ran. The Ordinators said, “Sure, that tracks,” and killed all the Khajiit on site, because: Ordinators. They then labelled all the boxes “Khajiit Skooma Bubblers” and sent them to the evidence locker in Vivec City. Where, of course, they promptly went missing.

The Dunmer know darn well those things were designed with Vvardenfell glass by a Vvardenfell artisan, but as a people they excel at both self-deception and blame-shifting. Meanwhile, the Khajiit are like, “Meh, whatever, add the accusation to the list of injustices, just quit Bogarting.”