Archive for the tag “quotes”

This is what the inside of my head sounds like when I’m playing in Clockwork City. Happy Friday! 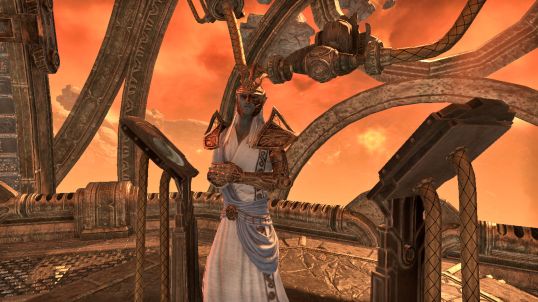 People say life is the product of our choices, but I’ve never found that to be the case.
– Sotha Sil, at the culmination of Clockwork City’s main quest

Zells: Okay, but… the “Dancing Spider” fabricants: those were a choice, right? They didn’t exist, and you decided to make them, and now they’re everywhere, jumping on me, making that snickity-snackity sound with their pruning shear pincers as they try and sever my body parts… leaping clockwork spider-bots, Sil. You did that. On purpose. Choices matter.

Sil: Life is such a mystery; who among us can precisely define causality?

Zells: And hey, about that mega-processed “nutrient paste” everyone trapped in your Clockwork City eats to survive… I’ve noticed there are no graveyards here, no bodies. Have you ever considered that your choices are not the choices others would make, if they had the chance?

Sil: “Choice” and “chance” are both illusions, of course. The flow of time does not alter its course for the wishes of individuals, regardless of their nobility of purpose.

Zells: Riiiiight. Speaking of that no-graveyards issue – I also notice you encourage your apostles to be curious about all things, except information about the process by which you create your factotum servants is behind a hard firewall. And I’ve noticed the factotums say “By Seht’s Will I am bound” quite frequently. Would it be wrong to assume those factotums are powered by soul gems containing the souls of your former citizens? Perhaps that’s why so many of them end up “defective” and prone to attacking everyone? Since being trapped in a soul gem in a metal body is an unbearable existence that drives souls mad?

Sil: Existential boundaries are always in flux, a continuum rather than a clear divide as we all like to fool ourselves into believing. From the long view, who of us can say what “life” even is?

Zells: Yeah, that’s what I thought. So glad we had this talk. You’re the worst, buddy.

Sil: I don’t disagree; I anticipate paying quite dearly for my many transgressions. If only I could have altered my behavior at some point and prevented any of this from happening.

“Wait, hold on – you’re not only still on that same run in vCoA2, you’re still on the Ash Titan? It’s been over half an hour!” <audible snicker>
-Amused Bystander

Spoiler: It was actually way more than half an hour.

“You do zero points of damage per second when you’re dead.”

Can confirm this is true via extensive testing last weekend.

“Have you heard the one about the Telvanni chef?  Her idea of a hot meal was burning down the tower!”
– Guard at Kragenmoor, Stonefalls

“Sheesh, you forget one plate of Fishy Sticks in the oven, burn down one mushroom tower, you hear about it for years.  This is why I don’t cook.” – Zellfire

“Bloody business, war.  There was a time when I loved my axe for its sharpness and my armor for its shine, but no more.  Today I love what they defend.  Don’t lose sight of what’s behind you in the hatred of what’s before you.”
-Lyris Titanborn

When I started this blog, I had no intention of ever posting personal comments, let alone political commentary, but it’s been a long week and I feel I must say something important.

To my international friends: many of us are deeply embarrassed by the election and do not support the bigotry and hatred represented by the campaign that won the electoral college.  We are fighting, and we will continue to fight – not only because we hate what we see coming, but also because we love: we love our Jewish grandmothers and our Hispanic neighbors and our gay nephews and our black professors and our Muslim in-laws.  We love each other, and this crazy, melting-pot experiment of a country, and we will fight to defend the ideals upon which it was founded.

Hatred is blind and destructive; love sees and defends.  I will defend.

“We just have to have faith, my friends!  … and maybe a little wine.”
– Priest of Akatosh, Kvatch

Is how I feel about this damn election.

To be fair, Fedar, a lot of the best opportunities also involve crypts.  But remember this, always: “abandoned Daedric shrines” are never actually abandoned.  Not once, not ever in the history of Tamriel.  For the love of the Divines people, stop picking them as the site for your romantic rendezvous or smuggling deal, no good can come of it.

Posted in quotes and tagged caves are scary, Daedric shrines, it's the way of the world, quotes, wilderness quests, Wrothgar | Leave a comment

“A pleasure to have you with us, friend.  I look forward to recovering the valuables from your corpse.”
-Magnifico Jalid, Undaunted

Fair enough!  I respect both your brutal honesty and your assumption of survival, Jalid.

Happy Friday, everyone.  Enjoy looting your corpses over the long holiday weekend. 🙂

“Sane? That’s in the North, isn’t it?  I don’t believe I’ve had the pleasure.”
-Caldwell

@Zells: I feel ya, Caldwell.  I keep meaning to make the trip myself, but things keep coming up, and — oh, look! A squirrel!