Archive for the tag “why oh why?”

For some reason I’ve been hearing a lot of people bashing training dummies in zone chat lately, and I feel like most of them are completely missing the point.

Yes, actual combat produces radically different DPS data than the training dummy due to a variety of factors.  However, the DPS stat conveyed by attacking a training dummy consistently gives your top-end DPS under perfect personal conditions – it’s a control number.  That means the environmental variables are reduced, and we can compare apples-to-apples.

If you tell me you just did 25K on a certain boss, that number doesn’t mean anything to me – was it higher because that boss was susceptible to your attack type, or because you had a perfect storm of crits and procs?  Or is that number much lower than your usual because you had to do a lot of evasion?  By contrast, if I tell you I can do 21K DPS on a training dummy, you know precisely where I am, and have a much better chance to gauge how effective I’ll be in a party.  That’s what a control number is.

2.”They don’t actually help with anything.”

Zells: Well, maybe they don’t help YOU, but…

If you want to test a particular kind of attack to see if it triggers a proc or special ability, it can be really difficult to find the right conditions “in the field” to accurately assess that, particularly if you need a large sample size for extensive testing of meta-data.  And it can take time to wander around and find the right kinds of mobs.  But with a training dummy in your back yard, all you have to do is go try the attack and see.

3.”They don’t actually help with anything”, part 2

Smoothing out your rotation is a big part of raising your DPS.  You’ll switch abilities around your bar a lot when you’re trying to improve, and having a way to simply practice going through the motions is hugely helpful in terms of developing the muscle memory for real combat.  For real.

Okay, not JUST because it’s pretty, see above.

But also: y’r damn right I like it ‘cuz it’s pretty.  Aesthetics and visual appeal are a big deal to me, and so is the role-play and personality aspect of my characters.  Being able to have a combat dummy in some of my character’s houses enriches the game experience for me.  If aesthetics weren’t important, we wouldn’t have dozens of armor motifs.  If the community didn’t enjoy having custom-made, personality-driven spaces in the world, we wouldn’t have player housing.  Just because something doesn’t have value for some players doesn’t mean it isn’t providing value to the rest of the community.

Lastly – you are correct, my combat dummy IS pretty, thanks. 🙂 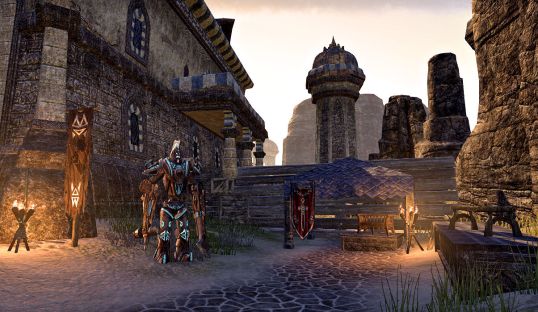 Crown: But we were so close that time!

Crown: But that was so much better!

God help us, it actually was better.  For a value of ‘better’ that still includes a total party wipe.  Or ten.

“Wait, hold on – you’re not only still on that same run in vCoA2, you’re still on the Ash Titan? It’s been over half an hour!” <audible snicker>
-Amused Bystander

Spoiler: It was actually way more than half an hour.

Whenever my bank alt in Daggerfall steals furnishing patterns from the bank containers, they are usually Breton patterns.  When Issa the Blacksmith pulls patterns out of Deshaan backpacks, they are almost always Dunmer ones.  So I got it into my head that if I wanted Redguard patterns (which I do, so much) I should farm containers in Alik’r.

Uh, yeah.  I don’t know if Redguards are allergic to end tables, or if there’s a local superstition about backpacks being evil.  But for whatever reason, there are hardly any recipe-possible containers in Alik’r.  I spent hours last night looking and came up empty, pretty literally.

I started in the west and moved east across the zone, went into each building and scavenged through all the camps and settlements.  My usual standard for whether or not a building is worth stealing from is a minimum of 5 containers.  (Recipe-possible, not crates.)  I did not find a single building in Sentinel that had 5, even the Inns.  Many buildings had none.  Even the public dungeon only had 2 backpacks, no lootable urns.  I got 3 patterns out of the whole zone – two Khajiit, one Redguard.  The Redguard pattern was a “bin, sealed”.  Wah-wah.

The only single place in Alik’r I found worth checking out is in Leki’s Blade, the settlement mid-zone, north of Bergama.  On LB’s west side, just inside the wall, there’s a collection of tents in a training area, and each tent has three backpacks and an assortment of trash gear; 12-15 backpacks total.  But b/c they aren’t inside an instance, I believe they’re only lootable by one person until they respawn, like harvest nodes.

Still can’t say for certain that there’s a better chance of getting race-specific patterns in different zones, or it’s just been a weird RNG quirk with the Breton and Dunmer ones.  But I can verify that Alik’r is crap for farming them. If you know of a good place, please tell me.  Meanwhile, I’m moving up to southern Bangkor’ai and will report if I have better luck there.